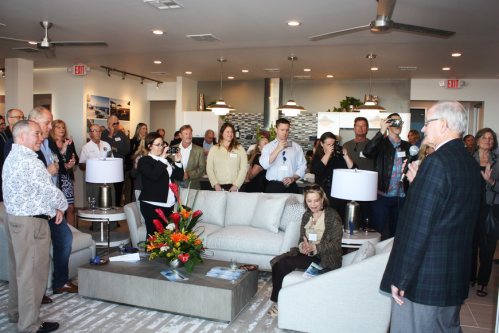 A company that will have a lot to do with the anticipated resurgence of Daytona Beach in the next several years had a ribbon cutting Jan. 24 for a sales center in Daytona Beach Shores for an oceanfront, luxury condominium. Groundbreaking for Max Daytona, a 12-story,72-unittower will begin later this year and unit prices will range from a half-million to a million dollars.

Bayshore Capital Inc., the developer, owns five other vacant lots in the Daytona Beach area. Ted Hunter, director of development, said there are several options for what they may construct on the properties, including condominiums, resort hotels and restaurants. Whatever is built will reflect the same high-quality as Max Daytona, he said.

Bayshore officials know the areawell,because they were the company that first worked with Hard Rock starting in 2013 to open a hotel in Daytona Beach. Hard Rock eventually backed out of the deal, apparently because of the uncertainty caused by the struggle between the City Commission and local residents over driving on the beach.

Beach traffic is not a factor in building Max Daytona, said Henry Wolfond, CEO and chairman of Bayshore.

Hard Rock, no longer working with Bayshore, found another location and is set to open a hotel soon at 918 N. Atlantic Ave. on a drive-free stretch of beach.

“It’s great news that the Hard Rock is coming,” Wolfond said. “It will be a game changer.”

Even though their Hard Rock effort fell through, Wolfond said Bayshore learned a lot about the area’s potential during the four-year effort.

“Most important, we learned there is a discerning buyer looking for a luxury unit,” he said.

Interested buyers have been found as far away as Canada, where Bayshore is located, and nearby in Volusia County. Bayshore officials expect many owners to use the condos as a second home.

Wolfond said Daytona Beach has begun a resurgence, which began with One Daytona and is now happening on the beachside.

“And finally the Treasure Island is being rebuilt,” he said about the hotel that has been a deserted shell since the 2004 hurricanes.

In other parts of the country, tall buildings stand on pilings that are driven down to bedrock. But hotels on the barrier island here are built on sand.

Bill Weeks, of WJ Weeks Architecture LLC, who designed Max Daytona, said “friction pilings” are used, where the friction of soil holds the pilings in place. The depth of the pilings is based on the type of soil and the size of the building.

First, an auger digs a hole, and it’s filled with concrete. A rebar cage is then sunk into the concrete. If the soil is ever scoured out by wave action, the rebar will hold the concrete piling in position until the soil can be replaced.

Older units, such as the high-rise condos that line State Road A1A in Daytona Beach Shores, actually sit on a pad of concrete that is so wide the building can’t tip over. A seawall protects the pad from being scoured out. This “pad” design is no longer used, Weeks said.