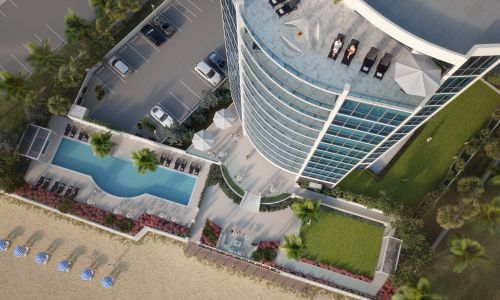 DAYTONA BEACH SHORES — Bayshore Capital, a Canadian developer, just got city approval to build a 12-story, 136-foot high condominium on the sands of this seaside community.

The City Council last week approved a site plan to build the high-rise on two vacant oceanfront parcels just north of Botefuhr Avenue on the city’s northernmost city limit. The site sits just a little to the north of the former Treasure Island hotel, which is undergoing a $50 million renovation.

Edwin Peck Jr., president of Peck & Associates Construction and general contractor on the project, wouldn’t give an official comment Friday on the timeline for the project, citing a confidentiality contract with the landowner.

But according to city documents, Bayshore Capital president Ted Hunter had mentioned made a presentation to the planning and zoning board in December. Minutes from the city meeting state the developer hopes to break ground midyear and sales are expected to begin this month.

Construction was already underway on a temporary condo sales office at the site as cars rushed by on South Atlantic Avenue.

City planning documents show a rooftop club and community room overlooking the Atlantic Ocean. Below, 10 of the floors will be residential and house 72 1-, 2- and 3-bedroom units, while the first floor will contain the lobby, offices and storage.

The City Council waived the requirement to build a public walkway, citing a nearby beach ramp, and a variance was given to the project in August for the 136-foot building height. Since then, city leaders voted to eliminate the height restrictions.

Meeting minutes show prices for the luxury units will range from $450,000 to $1 million per unit, but Councilwoman Lorraine Geiger said a mailed flier shows the units start at $500,000.

The City Council’s approval follows a year of several tension-filled meetings when city leaders pushed to eliminate a height cap of 12 stories or 110 feet, but Councilwoman Lorraine Geiger said no one in the audience commented on the project.

“They’re putting like 77 trees outside,” Geiger said, adding that was well over what is required. “They’re not cutting any corners.”

She said she learned Bayshore Capital owns several other properties in the area, adding, “I hope they’ll be doing more business in our area.”