Condos to the MAX 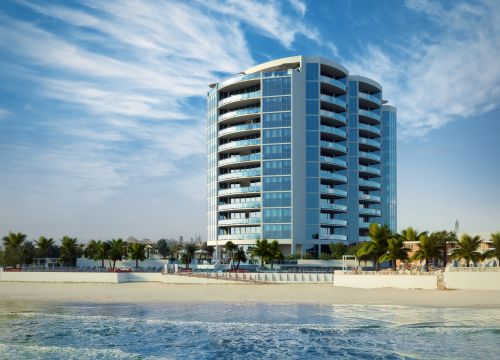 DAYTONA BEACH SHORES — When the grand opening bash for the new Daytona Beach Hard Rock Hotel was held earlier this month, it was an admittedly bittersweet moment for attendee Henry Wolfond.

“It would’ve been great to be celebrating the opening of the Hard Rock that we would’ve developed,” the CEO of Bayshore Capital Inc. conceded in a recent interview.

Daytona Beach-based Summit Hospitality Management Group took over efforts to bring the Hard Rock brand to Daytona Beach a year ago — with encouragement from Wolfond — after Toronto, Canada-based Bayshore suspended its own project two miles down the street, which it began in 2013.

Today, the 10.2-acre site at 801 S. Atlantic Ave. where Bayshore intended to build its Hard Rock Hotel & Cafe remains vacant. But Wolfond and company are back with a new project less than a mile to the south: a sleek, 12-story luxury condo tower called Max Daytona.

“Max will be the benchmark for the new standard of living on the World’s Most Famous Beach,” Wolfond declared in a recent press release.

A sales center for Max Daytona has opened on the development site at 1901 S. Atlantic Ave. in Daytona Beach Shores where Wolfond and other Bayshore executives recently spoke with The News-Journal.

While Bayshore has yet to earn a return on the $13 million it spent on its Hard Rock project before it was scrapped, Wolfond said his company gained a valuable insight from the experience, and it isn’t what some might expect.

“One of the key lessons we learned (from the original Hard Rock project) was that there is demand for luxury condos. People are willing to pay more money for a higher level of quality,” Wolfond said.

The median sale price for beachside condos sold in April in the Daytona Beach area was $207,000, a 20 percent increase over the median price of units sold a year ago, according to local observer Ron Wysocarski, the CEO and broker of the Wyse Home Team Realty in Port Orange and Flagler Beach. The majority of the 143 condos sold were oceanfront units along A1A, with the rest along the Halifax River, he said.

Max Daytona’s prices may seem high for the Daytona Beach area, but it’s “luxury at a fraction of the cost” for comparable oceanfront luxury condos in other parts of the state, including Sarasota, where buyers can expect to pay “close to $1,000″ a square foot and Miami, where the cost for oceanfront condos in some areas can be in the $3,000 a square foot range, according to Wolfond.

Bayshore has already received deposits for 21 of the condo tower’s 72 available units, with those deposits set to become “hard contracts” this coming week, he said.

“Once we have 30 contracts, that will give us the green light to proceed with construction,” said Lorne Hochstadter, Bayshore’s director of marketing.

Wolfond said his company plans to break ground on the project this fall, with the first units ready for occupancy in either summer or fall 2020. The total cost of the project, including acquiring the land, is expected to be $40 million.

Condos at Bayshore’s proposed-but-never-built 107-unit Residences at the Hard Rock Daytona Beach, which would have been part of the company’s planned Hard Rock Hotel & Cafe complex, had prices averaging $580 per square foot. Before the project was suspended in 2016, Wolfond said his company had hard contracts for 47 units, worth more than $40 million. That should have been enough to move the project forward, he said, had it not been for cold feet on the part of its financial backers.

The reason, he said, was the prospect of a lengthy legal battle with beach driving advocates, who opposed plans by the developer and Volusia County to ban motor vehicles in the section of beach behind the planned resort.

The proof, he said, is the strong interest being generated by Max Daytona, which unlike the original Hard Rock project, won’t have restrictions on beach driving.

“When you go to a resort, you expect a certain degree of safety as well as peace and quiet,” Wolfond said. “Beach driving is sort of incongruous to a resort experience.”

At Max Daytona, on the other hand, “condo buyers are coming in knowing there’s beach driving. People are going in with their eyes open. Beach driving is a deterrent to some buyers.”

Those putting down deposits on units at Max Daytona include buyers from as far as France, Canada, and California, and also include some locals, whom Wolfond described as noted area “business leaders and philanthropists.” The largest (segment) of buyers are from Central Florida.”

Orlando area residents Bill and Donna Wehner said they decided to put a deposit down on a unit at Max Daytona after visiting the sales center, which is designed to look like a condo unit, complete with an expansive veranda overlooking the ocean, as well as a scale model of the tower.

“I love the building,” said Bill Wehner, who was especially impressed with the tower’s planned amenities, which will include a skyline health club and lounge complete with caterer’s kitchen, and dual panoramic top-floor sunrise and sunset verandas.

“That appealed to us,” the retired insurance industry executive said. “It’s not something you see in the Daytona Beach area.”

The Wehners already own an oceanfront condo in a slightly older complex in Daytona Beach Shores, but said they liked the more modern look of Max Daytona, with its floor-to-ceiling windows, as well as the more efficient layouts that take full advantage of the available views.

“We saw this ad (for Max Daytona) and saw that it was different, it wasn’t a brick-and-mortar place, it was a glass place, with all the latest glass that’s well beyond the hurricane standards of today,” Wehner said.

Wehner said he would prefer to not have driving on the beach as he and his wife look forward to having their grandchildren come over for visits, but said that concern wasn’t enough to prevent them from agreeing to buy a unit at Max Daytona.

He acknowledged that the price of units at Max Daytona is “on the high side, certainly for Daytona,” but added, “If it fills up at those prices, it’s certainly a good statement for the area.”

Currently, in the Daytona Beach area, there are only four oceanfront luxury condos available for sale in the $1 million range, all in the Aliki Tower complex in Daytona Beach. “That’s it for the entire beachside area, from Ponce Inlet to Ormond-by-the-Sea,” the veteran Realtor said.

That could change with Max Daytona. “I’d love to see this project get built and thrive,” he said, adding that it could spur more luxury condos to be built.

Brett Dill, president of Miami-based Swerdlow Group, the developer of the riverfront Marina Grande on the Halifax twin-tower luxury condo complex in Holly Hill, said his company welcomes the Max Daytona project, viewing it not so much as competition but rather an affirmation that the area has a need for more high-end products.

“I think it’s an extremely positive thing for this market,” Dill said, adding that the Marina Grande appeals to a different type of buyer: those more interested in boating and intracoastal living and who may be looking for a primary residence as opposed to a second home.

“I’ve been extremely pleased with the change in direction for the Daytona Beach area with the opening of the Hard Rock ... One Daytona, Latitude Margaritaville and Tanger Outlets,” Dill said of the increase in upscale developments, which include Protogroup’s planned 31- and 28-story Daytona Beach Convention Hotel and Condominiums oceanfront development that’s going up on the east end of Oakridge Boulevard.

Wolfond said his company owns four other oceanfront development sites in the area, including a 3.8-acre lot just a couple doors north of the Max Daytona site. All, including the former Hard Rock site, could be developed into condos or hotels or a combination of the two, but no plans for those sites have been firmed up as of yet.

When he announced plans in 2013 to develop a Hard Rock Hotel & Cafe here, Wolfond predicted that bringing the iconic brand to the area would help transform Daytona Beach and create interest in more upscale developments.

Wolfond predicts Summit’s Hard Rock Hotel will “do very well,” adding, “I’m happier that he (Abbas Abdulhussein, Summit’s managing partner) did it than if it didn’t materialize at all.”

And even though the new Hard Rock is nearly three miles to the north, he said Max Daytona is benefiting from the positive ripple effect from not only that new attraction, but also other developments in the area including the new oceanfront Landshark Bar & Grill and Cocina 214 restaurants that also opened earlier this year just a short walk up the beach.

“There’s no reason Daytona Beach can’t offer the same levels of quality as Orlando and Tampa,” Wolfond said. “I think we’re in the first or second inning (of the area’s transformation), but everything is pointing towards this being a great place for a second home. It’s the best deal on new oceanfront real estate anywhere in the United States.”